How to Learn Good Arabic

Who doesn't know Arabic? Arabic is a language that has spread widely in various countries. Not only in their home country. This is accompanied by the spread of Islam as well. In Islam, most of the worship process uses Arabic. When praying, dhikr, reading the Koran, and much more. Indonesia is one of the countries with the largest Muslim population in the world. With the majority of the Muslim population, automatically the use of Arabic can also be said to be large and wide. However, one question arises. Do all residents understand and understand Arabic? Of course not. Arabic may be understood its meaning and meaning only by those who have studied it. For example, from the students who study the field of religious sciences daily and of course Arabic. 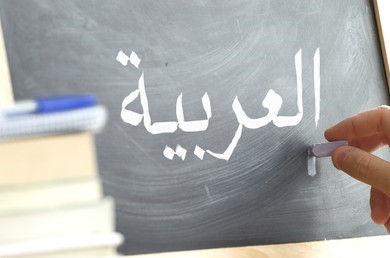 Then what about ordinary people or those who are just learning about Arabic? Are there any tips and tricks that can be used to make it easier to learn a foreign language? The answer is of course there is. In the current millennial era, many methods can be used in learning Arabic. Starting from learning directly to teachers, joining communities, tutoring institutions, or even the easiest way is to use an application. Below are the tips and tricks:

1. Learning directly from the teacher,

This method is considered more effective and effective to train skills and increase language knowledge. Because by meeting a trusted teacher, we indirectly also hold the key to a science. In various kinds of exact sciences, many "sir" or secrets can only be explained clearly by a trusted teacher. Friends of Ali R.A once said which means: "Khat knowledge is hidden behind the teaching of a teacher". These words can be interpreted as saying that in various scientific fields (not only khat or calligraphy) there must be secrets of knowledge that can only be revealed with the help of a trusted teacher.

For today's millennial generation who are often lazy (lack of movement) and prefers to hang out with their gadgets. Perhaps this third way is very efficient in language learning. Currently, there are many language learning applications on smartphones. The methods used also vary. Some use a quiz system, language games, audiovisuals, and much more. Just choose which one suits your busy life.

There are many more tips and tricks in learning languages ​​for beginners. Broadly speaking, there is only one key in the language learning process, courage. With courage we can learn to speak without fear of being wrong, we can dare to force ourselves to learn, which continues until we get used to it. Dare to fight the laziness that is in us.

Because actually as humans we have to make peace with laziness, make peace so as not to waste more time. "By the time indeed mankind is in loss, except for those who believe and do good deeds" (Q.S Al-Asr). You only live in this world once, life is meaningful. Thank you...